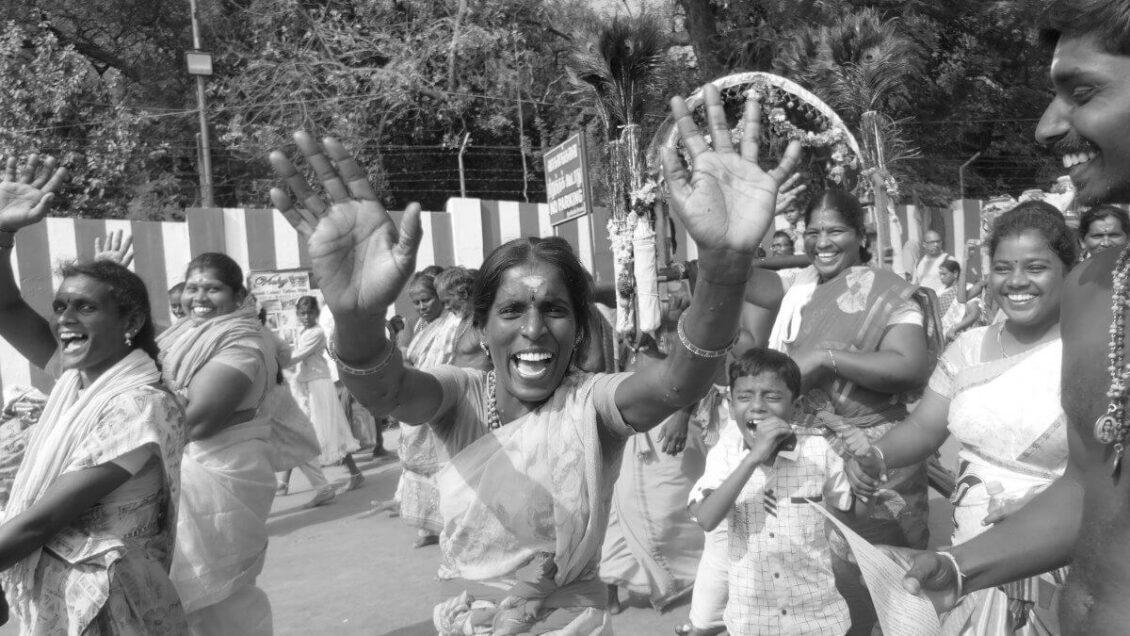 Discover myths and legends of the Thaipusam – Lord Murugan festival at Palani, where devotees pray, carry the kavadi and dance at the festival.

Several km away from Palani the road was choked with hundreds of thousands of foot pilgrims, all gaily dressed and many singing devotional hymns as they walk. Woman, man and children, mostly barefoot or wearing socks. Some carrying, bags, others with wooden structures on their backs, one man had a rooster sitting on his head. On the side of the road stands giving out food and drinks, and long lines of people waiting. Big groups and families peacefully walking all into the same direction. The kavadi pilgrimage is a large, colorful procession. Devotees dress in bright orange, yellow, and green – Lord Murugan’s favorite colors – while they chant and walk to the temples of Palani. At the Thaipusam – Lord Murugan festival at Palani the vibe is great, we love festivals.

Palani Thaipusam is a festival held in the Periyanayaki temple around January or February in the post harvest season. The word ‘Thai Pusam’ is the combination of two words Thai is the Tamil month and Pusam refers to the star nakshatram. This particular star is at its highest point during the festival and the brightest one in the sky. Legend has it, that the very purpose of Murugan manifesting on earth is to destroy the evil forces represented by Sooran and so establish Dharma -“the right way of living”.

Myth has it also, that on Thai Pusam day, Mother Parvati gives Murugan the all-powerful Vel (the spear).

Beginning with flag-hosting at Perianayagi Amman temple, this festival runs on for ten days. Kavadi of various types (with holy water, sugar, flowers, tender co-counts, etc.) are offered to Murugan at Palani.

It is a remarkable feature of this festival how the devout Bhaktas (devotees) bearing Kavadis are parading. The Bhaktas coming from several distant places dance their way through the streets to reach the Muruga Sannidhi to the accompaniment of music, both instrumental and vocal.

On the 6th day, there is procession of Lord Muruga with Valli and Devayanai in the Silver Car. During this, Kavadi dance and rural musical-dance are performed. We are there with the devotees.

On the 7th day, there is “Thai Thaer” (Wooden Car) and thousands of devotees participate in this event. On the 7th day “Chinna Kumarar” goes round in His Golden Car.

The Significance of Thaipusam – Lord Murugan festival at Palani:

During Thaipusam, the people thank Lord Murugan for granting their wishes and defeating the “daily demons” that plague their lives, for example illnesses, career blocks or infertility. Believers not only thank him, they also ask forgiveness for transgressions made, as well as pray for blessings. This festival of faith, endurance, and penance honors also courage, wealth, and wisdom.

Some devotees drink no alcohol, and eat no meat before the occasion while others shave their heads as an act of gratitude, repentance or as a poignant plea to have prayers answered.

People who are willing to participate in Kavadi and pada yatra have to fast and pray regularly before approximately 48 days before Thaipusam. But once they start their barefoot walk, with the Kavadi on their shoulder, they should not keep it down until they reach a sacred place like temple or ashram, it’s because the Kavadi they are carrying is equal to Lord Muruga Himself.

Some of the kavadi bearers do not wear slippers and walk all the way from their homes to the shrine of Lord Muruga barefooted. They wear the sacred `Rudraksha Malas’ to cover their chest. Thousands of devotees flock to Palani. According to palani.org,

The kavadi is associated with Idumban, the vassal of Muruga, and the tradition originated here in Palani.

The Origin of the Kavadi Ritual

Or How Murugan, Idubam and Kavadi came to Palani

Sage Agastya wanted to take two hills – Sivagiri and Saktigiri – to his abode in the South and commissioned his asuran disciple Idumban to carry them. Idumban was one of the very few asuran (demon) survivors of the surāsuran war between Murugan’s forces and those of Surapadman. After surviving the war he had repented and became a devotee of Lord Murugan.

As per historical texts, Palani obtained its name from the myth of ‘Pazham-nee’, which literally means

“You (Lord Murugan) are the fruit.”

Murugan had just been outwitted by His brother Ganesha in a contest for going around the world and He was still smarting over the matter. Ganesha had won the prized fruit (the Jnana-pazham) by simply going around His parents Parvati and Shiva, his “world”. Long after this, Murugan came seating on His peacock, after flying around the world, to find that the prize had already been given away.

In anger, Murugan vowed to leave His home and family and came down to Tiru Avinankudi at the Adivāram (meaning ‘foot of the Sivagiri Hill’). Shiva pacified Him by saying that Murugan Himself was the fruit (pazham) of all wisdom and knowledge.

Hence, the place was called Pazham-nee or Palani.

Later Murugan withdrew to the Palani hill and settled there as a recluse in peace and solitude.

In the meantime Idumban bore the hills slung across his shoulders in the form of a kavadi, one on each side.

When he reached Palani and felt fatigued, he placed the kavadi down to take rest. When Idumban resumed his journey, he found that he could not lift the hill.

Muruga had made it impossible for Idumban to carry it. Upon the hilltop the great asuran spotted a little boy and demanded that he vacate at once so Idumban could proceed with his task. The boy, who was yet in a fighting mood, refused. In the fierce battle which ensued, Idumban was slain but was later restored to life.

Idumban belatedly recognized the boy as none other than his ista devata Murugan and prayed to Him that:

Whosoever carried on his shoulders the kavadi,

signifying the two hills and

visited the temple on a vow should be blessed; and

He should be given the privilege of standing sentinel at the entrance to the hill.

Hence at Palani there is the Idumban shrine half-way up the hill where pilgrims offer obeisance to Idumban before entering the temple of Dandayudhapani Swami.

Since then, pilgrims to Palani bring their offerings on their shoulders in a kavadi. The custom has spread from Palani to all Muruga shrines.

The Legend of Palani in pictures

“The term Kaavadi appears to be a combination of the two words Kaavi and Padi,

which denotes the vow made to walk a distance to a particular place of pilgrimage on foot.”

Kavadis vary in shape and form, we see flowers and decorated peacock feathers with brass bells adorning it. Some Kavadis can weigh up to 35. kgs. Many pilgrims, man, woman and children carry the Kavadi in different sizes, they symbolize the hillocks carried by Idumba.

Some devotees show their complete dedication; when they pierce their body, tongue, and cheeks:

Some use metal spikes and have hooks inserted into their bodies while in a trance as they join the procession. Surprisingly, little to no blood is spilled throughout their walk. This is quite a sight and I wonder how these kavadi bearers withstand the pain. But their fervent faith in their Lord Murugan’s protection spares them from pain and prevents them from shedding blood. Bearing a kavadi is an act of devotion and humility at Thaipusam – Lord Murugan festival at Palani.

The usual Kavadi, or kanvar — literally “sacrifice at every step”, is a small wooden structure with an arch covered with a piece of cloth and it is held on the shoulders. The two sides of the Kavadi are covered with peacock feathers – the vehicle of Lord Murugan. There are two bags on the side of the Kavadi, to carry offerings to the Lord. Some devotees beg at houses to collect offerings, but today most people fill the bags on their own.

Some pilgrims carry milk pots, flowers and fruits as offerings along the way.

Other types of Kavadis

The Paal Kavadi, for one, is usually filled with fresh cow’s milk which is then carried on the devotee’s heads. Once the bearer reaches the temple, the milk will be used for prayers there.

Devotees carry pots filled with water or rose water on their shoulders or heads while embarking on a long journey to the abode of Lord Murugan. Again, the water will be used for prayers.

The Alavu Kavadi involves piercing of the tongue or cheek with a small spear, often known as the ‘Vel’, Lord Murugan’s weapon. The main concept of this type of kavadi is to prevent the person from speaking, thus preserving his attention, focus and energy towards Lord Murugan.

Another kavadi that involves body piercings is the Koodam Mulle Kavadi, which has devotees attaching hooks to small pots of milk or fruits before attaching those hooks to themselves, we have not seen this type of kavadi in Palani.

Parents carry their child in a bundle held by a pole of sugar cane as a gratitude of being blessed with a child.

As we wait for the Periya Thanga Mayil Vahanam (Golden Peacock chariot) on the seventh day of the festival, groups of Kavadi bearers dance and sing in front of the temple and the simple shack, where the chariot is waiting to be dragged out. We dance and “sing” with the devotees and witness the Kavadi dance performed by girls, woman and man.

Suddenly two senior dancers lay down with their Kavadi placed on their shoulder, one in front of the other and a coal burning with fire is placed in the middle, it looks like they pray to it. The drums are beating faster and faster, slowly the Bhaktas stand up and start to swirl with the Kavadi on the head. I could feel the vibration and power of the ritual – did they just dance on the hot coal, or was it taken by someone, I can only guess…

All the movements of Kavadi Attam are performed in such a way that the body is aligned with the base of the Kavadi. Facing the center, the performer moves in a circle or sways forwards and backwards. They may twist and spin in a row. They gradually move in a frenzy, in step with the rising beats of percussion instruments like udukku, chenda, etc, accompanying the procession. Sometimes nadaswaram, a wind instrument, is also used.

Movements of the peacock, believed to be the vehicle of Lord Muruga, are incorporated into the dance motifs. Devotees proceed to the shrine in groups, performing these movements. The Kavadi Attam in temples is often performed in a state of trance; the movements are not learned but performed through the memory of having witnessed or experiences about the kavadiyattam.

There are different myths about the kavadiyattam, the Kavadi dance.

One tells that this is the dance of the servants of Murugan, encouraging him to start the war with the demon as he had the divine spear with him. According to this, the word “Kavu” means temple or divine place and “Adi” means servants.

It is a ceremonial self-sacrifice and offering by the devotees to please Lord Murugan and a major ritual in Thaipusam festival. Kavadi denotes burden and the devotees are taking all their burdens on their shoulders and dance to appease the Lord. According to this belief, Murugan will enjoy their dance and remove the burdens from their shoulders.

Murukan’s lance, commonly the leaf-shaped Tamil vel or sakti – Sanskrit. The priest of Murukan is the velan, a bearer of the lance. When Murugan holds the lance as sakti, he and his lance symbolize

Patrick Harrigan, M.A. is the publisher of Murugan Bhakti websites including: | Murugan.org | Kataragama.org | PadaYatra.org | Palani.org | Tiruchendur.org --and other websites devoted to Skanda-Murukan, the multi-faceted pan-Indian deity of love, war, the Tamil language and the gnostic mysteries.
You might also like
Malai KovilPāda YātrāFestivalsPhoto Gallery