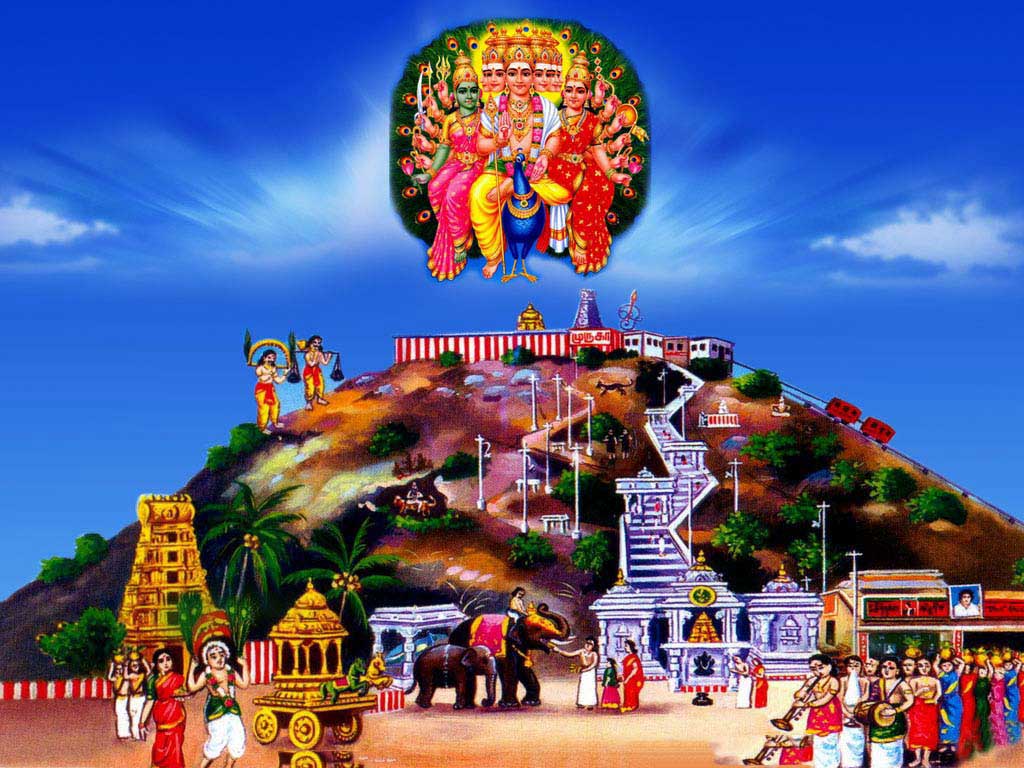 Wherever a Muruga temple is located; whether in India, USA, Singapore, Malaysia or Sri Lanka, Thai Pusam is celebrated there with gaiety, enthusiasm and devotion. But at Muruga temples in Palani, Thai Pusam is an especially grand and spectacular event.

But when Thai Pusam comes, the divine aura that pervades Palani atmosphere defies description. On Thai Pusam day, Palani looks enchanting. One sees a sea of humanity here, eager to immerse themselves in Muruga experience. Everywhere, one hears the names of the Lord. As the mantra, “Hara Haro Hara” reverberates, the whole atmosphere is charged with the air of divinity. For everyone assembled here, no other thought occupies the mind except that of Muruga.

When Thai Pusam comes near, we only think of Palani. Thai Pusam has become synonymous with Palani, the abode of Muruga. With the advent of Thai Pusam, a steady stream of devotees starts flowing towards Palani. They come from different regions, from far and near to converge at Palani. They may have differences like caste and class but while heading towards Palani, they are all united in their devotion towards Muruga. There may be young ones, old ones, women and men, rich and poor but all of them have one aim; to reach the Lotus Feet of Muruga, the Lord of infinite grace. They may be engaged in different occupations but they all consider worshipping Dandayudhapani as their primary occupation.

The word ‘Thai Pusam’ is the combination of two words Thai which refers to the Tamil month and Pusam which refuers to the star (nakshatram). The day of Pusam star in the month of Thai is considered very auspicious. The very purpose of Muruga manifesting in earth is to destroy the evil forces represented by Sooran and establish Dharma. On Thai Pusam day, Mother Parvati gives Muruga the all-powerful Vel (the spear). It is this image; Muruga holding the powerful Vel, sitting majestically on his transport, peacock, that we see in the Lord’s third abode, Tiruavinangudi in Palani.

The Vel that Parvati gives to Muruga is such a powerful weapon that it excels the power of Siva’s Trishul, Vishnu’s Chakra and Indira’s Vajrayudha. With the lance presented by Parvati, Muruga attains victory over evil forces represented by Soorapadman. Therefore, Thai Pusam is celebrated as a mark of victory of good over evil.

The formation of the Vel indicates that it is the source of all knowledge. The lower part that runs deeper and lengthy indicates that true knowledge should be deep and not peripheral. The wider portion at the top represents the vastness of knowledge. Finally, the pointed edge of the Vel indicates that knowledge should be sharp. Arunagirinathar has composed many songs like Vel Virutham on the significance of Vel. According to Arunagirinathar, Vel has the power to ward off the consequences arising out of karma (vinai theerkum kadir vel).

Just as Tiru Avinangudi temple, the temple atop the Palani hill is also considered very sacred and important. Saint Bhogar, a siddhar, is credited with the creation of the idol of Palani Dandayudhapani. Many years later, perhaps between the 7th and 11th centuries C.E., Cheraman Perumal, a ruler of Kerala, the contemporary of Saint Sundarar, built the temple around the shrine. Later, the Nayaks and Pandya kings developed this temple.

Thai Pusam is the most important event in the hill temple of Palani. Elaborate arrangements are made well in advance. Thai Pusam festivities start ten days in advance and culminate on Poosam day. On the Poosam day, Palani becomes heaven on earth.

The pilgrims visiting the Palani Hill for Thai Pusam have defined what true devotion is. They do not just pack their luggage, take a train or bus, and reach Palani. Most of them make preparations well in advance. A true devotee who seeks the blessings of Palani Andavar makes sure that he is pure in mind and body. He goes beyond the influence of senses. His attention is always centered on God.

Another unique feature that distinguishes a Muruga devotee is the vibhuti (sacred ashes) smeared over his forehead and body. Vibhuti signifies pure devotion. It is made by burning dried cow-dung and is associated with Lord Siva who appears clad in vibhuti always. Vibhuti gives us the grim reminder that what we consider as precious would turn into ashes.

In his Subrahmanya Bhujangam, Adi Sankara says: “Apply vibhuti and free your body from all diseases.” Siva Purana speaks highly of the value of vibhuti. In his Arumugam Arumugam song, Arunagirinathar says that one who applies vibhuti is worthy of reverence. In another song rendered at Kasi, Arunagirinathar says, “As we worship you with our body smeared with vibhuti, oh Muruga, grace us the knowledge to reach your Lotus Feet” (tiru neeri poosi meipadha mana sevadi kana vaitharul jnana makiya bodhakathinaiyeyumararul purivaye …..dharanikkadhi)

The devotees visiting Palani at Thai Pusam observe strict discipline and celibacy. They start fasting 41 days in advance. Just before Thai Pusam, they start their marathon journey barefoot only, chanting the mantra, ‘Hara Haro! Hara Hara!’ Though transport facilities are available, many pilgrims come to Palani by trekking difficult terrains and walking long distance. Most of them carry the kavadi on their shoulders.

Some devotees adopt the extreme ritual of piercing Vel through their cheeks. I think Hinduism does not approve any practice which causes wound and pain on the body. It is enough if we show devotion by means of bhajan, service and surrender. Some devotees shave off their head as a mark of sacrifice. Though the devotees in general, undergo many sufferings, during the journey to temple, one cannot see any sign of tiredness or stress on their face.

Some devotees generally stay in the Kozhummam Iyyerval Chatram, popularly known as Iyyerwal  Chatram, and perform Kavadi Puja and bhajans there. Ultimately, when they reach the top of the hill, their excitement reaches the crescendo and they dance in ecstasy.

As you arrive at Palani on the occasion of Thai Pusam, what attracts you most is Kavadi. Wherever you see, you find Kavadi. Kavadi is an arch-like wooden canopy, beautifully decorated and carried on the shoulders. According to legend, Saint Agastyar, an ardent devotee of Lord Siva, had asked his disciple, Idumbasuran to bring the two hillocks, Sivagiri and Saktigiri from Mount Kailasa to the South for his worship. Idumban connected the two hillocks with the help of a wooden piece in the centre and tied the loose ends with snakes and proceeded towards South.

On reaching South, he placed them at a spot for taking rest. Later, when he tried to lift it, he could not. He then saw a youth wearing a piece of loincloth and holding a staff (danda) atop the hill. He asked the lad to move away. But the child, claiming right over the hill, refused to oblige. Soon Idumban realised that the boy was none other than Lord Muruga and paid obeisance to Him. Lord Muruga showered His blessings and proclaimed that anyone coming to his abode with similar arch-like objects would be graced by the Lord. The Kavadi form of worship became the usual practice.

Many artists swing and dance by balancing the Kavadi over their head. It is a marvelous sight even children and women carrying Kavadi on their shoulders walking towards the top of the hill with extreme devotion. The number of Kavadis reaching the Palani hill on the occasion of Thai Pusam is estimated at around fifty thousand.

Having taken the arduous journey to Palani and having trekked the hill, when at last the devotees return to the ground, they are very tired, exhausted and hungry. Where would they go for lunch? Who will feed them? Having come to seek the blessings of Muruga, can they go back hungry? “No,” said some of the devotees from Kerala who had come to Palani during Thai Pusam. These devotees who came as a group from Kerala felt that they should do something to satisfy the hunger of pilgrims.

Thaadi Mani Iyer, who was doing hotel business at Koduvayur near Palakkad, and his friends collected some money and arranged meals for a few. That was the beginning of a new scheme of annadanam (mass feeding). Initially, while staying at a chatram (choultry), they procured the materials necessary, prepared food and served few people only. Gradually, the Annadanam scheme developed. Sri Nelluva Narayana Iyer, Sri Anamala Ramachandra Iyer, Sri Palani Muttiah and many others lent their solid support. Contributions started pouring in.

This happened nearly a century ago. Soon, the annadanam movement gained momentum. The organizers thought that there is nothing greater than serving the devotees of Lord Muruga. They believed that doing service and feeding the hungry devotees is equal to worshipping Muruga. Serving the Muruga devotees is serving Muruga.

Soon an institution was established at Kozhikode called the Tiru Palani Thai Pusam Annadana Sangham. As the number of mouths to be fed increased, the donations which came in the form of money and materials also increased. In order to regularize the transaction, the Tiru Palani Thai Pusam Annadana Sangham was registered and proper accounts maintained. The silent service which the Sangham has been doing for years has been appreciated by many. This year, 2015, the Sangham will be celebrating the 85th anniversary of annadanam service with justifiable pride.

To the ever-increasing number of devotees who climb the hill to worship Muruga, the Lord showers his bountiful blessings. “Palani Dandayudhapani is the Lord of abundant grace, the ultimate refuge for the people caught in the illusions of life. He is Kali Yuga Varada, the Lord who protects the devotees in this age of Kali Yuga. He is the Lord who leads the people from darkness to light”, said Sri V.S. Lakshminarayanan, an active member of Tirupalani Thai Pusam Annadana Sangham who does textile business at Thrissur.

Palani temple finds mention in many religious texts and literature. Many saints have highlighted the glory of Palani Andavar in their songs. Saint Arunagirinathar has composed over 90 songs about Palani Andavar and about Bala Murugan at Tiru Avinangudi, at the base of the hill. Some of the notable songs are Arumugam Arumugam, Ulaga Pasu Pasa, etc.

An important ritual done to the Dandapani idol is abhishekam or anointment. Though abhishekam is done with various items like pure water, sandalwood paste, vibhuti (sacred ash), milk, etc., the most prominent abhishekam is done with panchamritam; a sacred paste made with jaggery, ripe hill plantain, dates, etc. The word amritam in Sanskrit means immortality. Every devotee returning from Palani carries the panchamritam as the prasadam. Needless to mention, the devotee returning from Palani after worshipping Dandayudhapani feels liberated from the ocean of Samsara and finds unity with Muruga.

What is the message that we get from Palani Andavar? Muruga’s father, Siva is the source of all knowledge. Muruga’s mother, Parvati, is the embodiment of power (sakti). Having inherited the combined qualities of his parents, knowledge and power, Muruga has become the Lord Supreme, unequalled and unparalleled.

Yet, Lord Muruga has renounced everything, went atop the hill and stands with bare loincloth. He stands there as an andi (penniless mendicant). The message he gives is very loud and clear; stop coveting wealth, stop going after material pursuits, stop acquiring possessions and properties and adopt simplicity and humbleness. Let us distance ourselves from this world of illusion and try to reach Muruga, the eternal reality.

Also by the author V.S. Krishnan: Thaipūsam festival and the Vēl